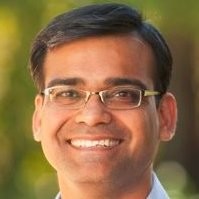 Co-founder and CEO at Indifi, a platform to expand access to debt financing for Indian SMEs.A successful first-generation entrepreneur in India.