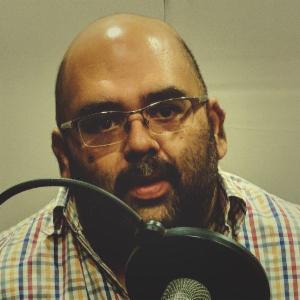 4
</>
Transcribe
Let's kick out of with your favorite quote my friend my favorite quote. This was actually interesting. Right? So we're building a office and so I actually was just assembling all of my favorite quotes for like, you know, painting on the walls and stuff like that. So I think that I would say my favorite quote is probably do or do not there is no try Awesome, what a coincidence do or do not and there is no try right Yoda. Yeah, where's our Empire Strikes Back rather? Yeah. We just posted the quote on our of all over social media this morning. Oh, really? Yeah. It is a great quote, right? Yeah it is and also there is another reason for our laughs then I think when I said assistant director you started laughing right? Well, it's It's something I did, you know, I mean, yeah, it's what I've always been into like the media space or like, you know, my degree in the US was in communication with radio TV film as my specialization, right? So when I came back movies was the first place I went in. Okay, and what did you do after so I started that and then I started I decided to start a e-commerce company in India when there were 300,000 total internet users in India. And so as you can tell not a very good idea, but yeah, that's why I did after that. I started that and then that kind of evolved into web automatize Technologies, which was a more of a which was turned into more of a service company. Right and what happened to the company now, so it was the business was not things have changed in the last 10-15 years, right? I mean like that company were we were making a lot of e-commerce websites for people we're making a lot of CRM applications for people things like that. And those are systems that are now better served. If you do software as a service rather than get your own customized thing built. Yeah, so, you know, it just was it was for those businesses to stop. Okay. So now tell us about IBM Podcasts sure started it last year March 2015 and it's a podcast Network. We're trying to create a general entertainment network in audio content which we feel is something that is missing in India. There is not we don't have you know, we have a deep tradition of audio content, right, you know. mean like the radio with Ameen Sayani and those kinds of things but for the last few years or over the last it seems like we have lost that concept of talk radio that concept of a conversation that you know sets the agenda. If you will that seems to have been something that's escaped. That's no longer there in India and it feel I felt like now with smartphones coming up growing at the speed. They are the penetration increasing to the degree that it hass with 3G and 4G getting more and more prevalent in the country. It felt like you know, this was a good time to start seeing it that could be re-established this concept of like, you know talk conversations Robin. How did you come across? I mean did you what are you listening to some podcasts or you are you already aware of them? So I've been aware of them for a while. I I'm actually so again and when I was in college in the u.s. One of the things I did was I interned at a sports radio station for a bit. I was always really into talk radio. I really enjoyed the format. It's something sports radio Howard Stern Don Imus, you know you even the political talk people like Lawrence O'Donnell Rush Limbaugh Etc. You know, we always really kind of enjoyed that kind of content and when I moved back to India 99 that point in time I was I used to listen to the start streaming on the net which was, you know, not easy to do back then the internet was really basic compared to what we have today, but used to listen to that stuff even back even after I moved back here and I will then went podcast started like I think 2003 2004 2005 something like that around that time frame. I started listening to a whole bunch of podcasts over there the first podcast I actually started listening to where all the so my niece was a great Harry Potter fan and there were a bunch of Harry Potter podcast that first started and those were really popular early on and that's actually where I first started listening to podcasts and I was like, okay, this is kind of interesting. Oh, but it's very clunky to do it. Right? I mean like you're download an iTunes burn a CD listen to that in your car. It was like, you know not it was not a great experience. It's not something that yeah, it wasn't something like, you know, I would ask somebody who is not in crew who is not technically sophisticated to do right.
Welcome to Tapri - #1 Live Audio Broadcasting Radio App