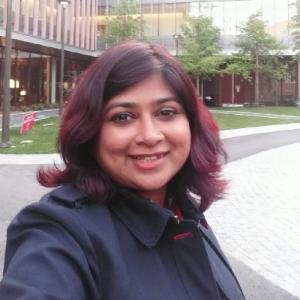 2
</>
Transcribe
Anjali why don't you tell us about your journey. So I think my journey really began as soon as I graduated from business school. I completely hate it being in business school, but only came to realize the value of it much later. I was placed in Whirlpool what I was actually trying to sell washing machines in parts of Chennai, they didn't have water. So that was the most sort of eye-opening as well as ironical experience that led me to the biggest decision I've taken to date which is I want to be part of solving big problems for which there are no easy answers and that's what led me to sort of quit the corporate sector very early and work in development. I joined an NGO called Andy Foundation based out of Hyderabad spent two and a half years understanding issues surrounding education healthcare organic. farming and the really the on-ground challenges in trying to get people out of poverty and then went on to Harvard to do another masters in development one that I paid much more for but enjoyed much more and then came back to India to work across consulting and now in Unilever to actually bring projects to life that are going to make a difference to people So are you tell us about your family background break, what does your father do and how your products so I'm really lucky to have a set of parents who are very can be described as very liberal. My father is an architect. And he's also been one of my biggest supporters in terms of any of the big shifts. I wanted to make I shifted from Mangalore to Delhi to pursue an education at lady Shri Ram College, a very unthinkable thing at the time because Delhi was considered very unsafe and it's blessed was very far. But one of the best decisions I've made really exposed me to parts of India that I was very unfamiliar with Then my mom while she's at home maker. She's also the epitome of someone who's extremely chilled out. She had three children and she brought us all up with their very in a way that I can only be envious of and I'm a mother today. She's really focused on being there for us as well as what matters at in the home environment. I have two brothers who have been subject to a lot. of fights and a lot of you know, like I said to say beating scratching from my side, but I thank them profusely because these are sort of skills that you need, especially when you're working on development issues because you really do need to have the stomach and strength to fight for what you want or fight for what you believe in. So I'm grateful for my brother's for giving me early training in. That regard and he was in life. My purpose is really to bring my education exposure to make a difference to issues that are really considered intractable for instance. You know empowering women is seen as a like a thousand year journey in South Asia because that's how long it's projected to take. Really close the gap between men and women and I have seen no less has made this projection. So this is a tough problem and I like to think of myself as someone who is engaged with the really burning issues of today and bringing the full wealth of her the investments that have been made in my education the time that I've spent working in various organizations and and my own innate abilities so I could articulate it as bringing my sort of my difference to make a difference because I do bring a very diverse range of experiences and education and I'd like to use all of that for a larger purpose.
Welcome to Tapri - #1 Live Audio Broadcasting Radio App