Divyank Turakhia-Entrepreneurship at 15 Podcasts in English 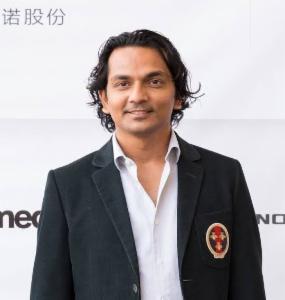 5
</>
Transcribe
Almost everyone who's listening most likely knows your story or has read about you in the various Forbes list and other things. You’ve achieved so much in your life, congratulations. But for the few who might not know the story. I want to start from your early days when you were 15 and you started thinking about entrepreneurship. I’d love to start from those early days. Sure, so it's yeah, it's it has been a very interesting journey and obviously, you know, when you look back there'll be lots of situations where I've had an incredible amount of fun all along building some incredible businesses with some incredible people to talk about the beginning of the journey it started even before I was 15. I would say that in some sense it started when I was really young and I got lucky in a sense that I used to read a lot and that was mostly because growing up, my father had a hobby of collecting books. And I you know as you may already know I didn't grow up rich. I grew up initially if you take the very early years, we my father grown up in a small town in Gujarat and when around the time that I was born or slightly before that, he had moved to Mumbai in India. And at that time he moved in with his brother. And so we moved into this one-bedroom apartment in *locality in Mumbai* where there were the 8 of us, which is my dad's family and my dad's brothers family in that same apartment. And a little after that, we moved into our own apartment where we were still about six people in a 2-bedroom apartment. So that was the very initial phase of growing up. Now in that, what ended up happening was even though we didn't have money, my dad used to spend almost all the money that he made in buying books, because that was his primary hobby. So I got lucky in terms of having that opportunity to be able to get access to a lot of knowledge early on. What kind of books were these? They were on literally everything. So it was fiction, nonfiction, it was biographies, it was stuff related to positive thinking it was stuff related to just general stories of or it could be completely random in terms of how to get things done. It was a wide variety of topics. Wow. Okay, how old were you at this time? Most of the nonfiction stuff I started reading from around the 5th or 6th grade onwards. Got it. So I would’ve been maybe about 9 or 10. Got it. I asked so intently because my daughter is going towards 6th grade, so she reads a lot as well. Well, that’s good. I mean I think reading is one of the ways you learn. At that time that was the only way you learn because this was still pre-internet. And learning is a lifelong thing, right? You can never stop learning. I mean if I look at my history I started reading and that was the form of learning that I had early on and I still continue to read a lot and learn a lot. I mean my goal generally is typically I spend somewhere between 800 to a 1000 hours a year reading and I've done that for the last 20-30 years now of my life. So it's an ongoing process and it doesn't have to be reading, right? I mean these days, there are many other forms. You can listen to a podcast while you're in the car. You can watch videos you can, there's Interactive learning... so whatever suits you, whatever you like as a form of reading or sorry as a form of learning is a form that you should pick up because as long as you can continue doing it, then you know, that's what was really important. So it's my idea has always been, you know one needs to read continuously and you can never stop learning. You read, I mean, at least I read as many of the top rated books, magazines, newspapers, trade journals, blogs, reports. It really doesn't matter. But at the same time, you know, we're all time-limited. And so it's equally important to pick and choose what is relevant and what's most important for you once you start reading kind of everything. Yeah, yeah. Wow, that's deep on the subject of reading and learning.
Welcome to Tapri - #1 Live Audio Broadcasting Radio App