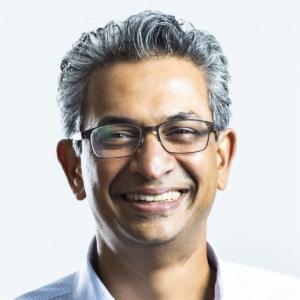 5
</>
Transcribe
Big species like e-comm and Mobility seeing a lot of renewed interest recent investment of Facebook in me show. What's your thoughts about that? You know, how are the e-comm to or e-comm 3.0 going to look like? Yeah. I mean look, I think it's a great point because if you if you had asked everybody to years ago, they would have said e-commerce is over right? We have Amazon and Flipkart and you know, they've both spent billions of dollars each how on Earth would any other startups really come up but the reality is look in a country where you know, we have 400 million plus over. One two million daily active only about 70 million Indians actually today transact of the eCommerce sites, right? So, you know, it's still less than 20% of the active user base is sort of transacting. So there's a huge amount of Headroom that's left. You know, if you call it the first 50 million Indians have now become very very comfortable transacting right? So they're going to buy lots of different things. So so the first big opportunity, I think we're going to see we are beginning to see some companies now is companies that are going to capitalize on the first 50 million and make them buy things. That maybe are are different. Right so company one of my portfolio companies fresh to home which actually sells fresh seafood meats and so on and so forth is just on fire, right? It's on fire because these first 50 million users now that they're comfortable buying phones and fashion and accessories are buying groceries from companies like big basket or also, you know, fresh fresh seafood, right? So so that's that those are set of companies that are going to go after the first 50 million users. And then I think you're seeing this new class of companies what what you call sort of e-commerce to Lotto really social commerce companies Me shows. In one one variety, but then you have companies like Simpson like bull bull like a conic that are really going to go after the non-english audience several of them will be video first products and really leverage sort of the in the ability for influencers to to impact Commerce. Right? So if you look at the ramp of a company like Bulbul, it's been quite staggering, right? So so I do think that we are going to see several billion dollar companies come out of this new wave of e-commerce, right? And then Mobility is very similar, you know, if you are asked to years ago people would have said Look, there's Ola and Uber. You know, we are not going to have any more players because you know any new player that comes up will be up against these two very well-funded very large companies. But the reality is today. I mean, you know, we've see probably have more activity in Mobility than we've ever seen and these companies are scaling very very fast. Right? So one of my companies is rapid over to the two wheeler ride-sharing company. It's just on fire. It's growing at unprecedented rates, right you look at companies like bound Soma companies like you Lou right. These are all going after very very Innovative models and the Is look most of India only can afford to spend a few rupees for transport. Right and and we have to invent models that are going to actually hit that price point or hit those set of price points with viable long-term unit economics. Right and you can't get there with four-wheelers. So my view is the four-wheeler game is pretty much grayed out and that's why we're seeing sort of slowing growth on the four-wheeler side. So it's really going to be three wheelers two-wheelers new kind of forms of a vehicle's and so on and so forth and over time a lot of them in migrate to Electric so I think again, You know, we are in a whole new era of mobility and I really do think we're going to see many more new large companies get built in mobility in India. As you rightly said India today has on two million e-rickshaw unorganized Market lot of Mobility Focus areas completely ignored a lot of room for entrepreneurs to innovate and enter it. I mean you come in if you think about it, right, you know, massive number of Indians take buses right massive number of Indians are on trains, you know, you went to segment that you Segment that's very very interesting media as a hundred million people that have two wheelers, right? You know, so if you think about sort of a two wheeler ride sharing model, it can be super super interesting and it's not surprising that Rapid or scaling so fast. So yeah, I think there is just incredible enormous opportunity in in in sort of the mobility space broadly defined and we haven't talked about, you know, electric Co we haven't talked about we haven't talked about ancillaries and so on and so forth where there'll be a lot of opportunity.
Welcome to Tapri - #1 Live Audio Broadcasting Radio App