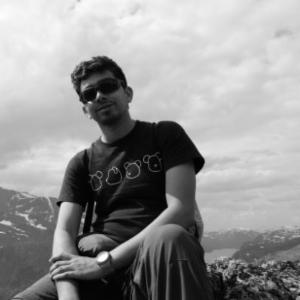 3
</>
Transcribe
Shishir, I have a quick fire round for you where I will ask you a few more questions, but you would have only one word or one sentence to answer, not more than that. Okay. Right. What's your biggest strength? Execution. What's the one personal habit that contributes to your success? Curiosity. What's your biggest weakness? Too much thinking. Too much thinking, awesome. What's the best book you read so far? A book… I’d say Siddhartha by Hermann Hesse. What’s the one online resource you would recommend to our listeners? It could be a website, mobile app, productivity software, you know any tool. Wikipedia. What's the one other Indian startup that caught your attention at the moment? Let’s say Paytm. For some reason, I was expecting that answer. Right, before I let you go, Shishir you have given us some great advice already, but what's your last parting piece of advice for budding entrepreneurs? One interesting thing which I noticed in some of the recent events, you know, those industry networking events is people were so desperate here, people were kind of guessing that funding is not available and what will we do, how can we build business? How can we grow? It's just not possible. I just kind of want to remind each and every one of the entrepreneurs who is actually thinking about it that funding addiction has come to India or probably globally in last 10 years and it made in India probably last four or five years only. Businesses were built before that and businesses were built with much lesser capital and more personal credit and that's how to build sustainable and lasting businesses. The addiction to raise money and you know grow unsustainably will not work. It has not worked before, 2001 told us. 2009 told us in financial services and you know, probably 2016 and 2017 will also see a very high rate of mortality because of businesses which were completely dependent on fundraisers. I think it's a good time to think about how to business how to build business sustainably and grow it rather than you know, expecting somebody to write a ten to fifty or hundred million check and then believe that I can grow based on that. Anybody can spend money and grow. It's not, it's not business. It's charity spending. You can, if you give me a hundred million dollars I can get you 200 million users on the platform. Not a big deal, but how you do that is the business? Wow, that's some brave advice, great advice there. Yeah, you have to build a business sustainably. Wow, you mentioned I mean networking events. Do you still go to networking events? How do you do your networking? How important do you think is networking for startup founders? It's very important. See, one of the key things in startups is resourcefulness and you know not paying for every single thing that you have to do. There are several things you can do while you can have collaborating. It also helps you understand what are the latest things that are happening in you come across some brilliant guys, thinking something interesting and just because you know you if you would have been in a silo, you would never have come to know that maybe that would have been a perfect idea. So it's important to network, but I don't like networking events where the sole purpose of networking is where there are fun feekers and there are fun givers and you know people just like to do 15 second elevator pitches to angels and VCs and more. That's not networking, that’s selling. Wow. That's not networking, that’s selling. Shishir, I'm sure people want to connect with you. Where can we find you? You can find me on LinkedIn, you can find me on Skype as well. Okay, I will leave the link to your LinkedIn page on the show notes here and with that I would like to thank you very much for your time. Thanks for sharing your story. I wish you all the luck.
Welcome to Tapri - #1 Live Audio Broadcasting Radio App